the ninth day of christmas: a devotional

i know, i know….today is supposed to be part two of the puzzle craft. but this morning i read this devotional by spurgeon and wanted to share it instead. have no fear, the craft will be finished tomorrow! 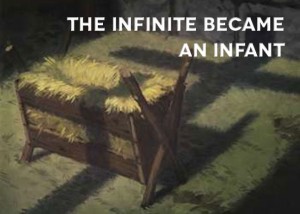 The Infinite Became An Infant

“The Lord Jesus Christ was rich. We all believe that, though none of us can truly speak it forth. Oh, how surprised angels were, when they were first informed that Jesus Christ, the Prince of Light and Majesty, intended to shroud himself in clay and become a babe, and live and die!

We know not how it was first mentioned to the angels, but when the rumor first began to get afloat among the sacred hosts, you may imagine what strange wonderment there was. What! Was it true that He whose crown was all bedight with stars, would lay that crown aside?

What! Was it certain that He about whose shoulders was cast the purple of the universe, would become a man dressed in a peasants garment? Could it be true that He who was everlasting and immortal would one day be nailed to a cross? Oh! How their wonderment increased!

They desired to look into it. And when He descended from on high, they followed Him; for Jesus was ‘seen of angels,’ and seen in a special sense, for they looked upon Him in rapturous amazement, wondering what it all could mean. ‘He for our sakes became poor.’

Do you see Him as on that day of heaven’s eclipse when He did ungird His majesty? Oh, can ye conceive the yet increasing wonder of the heavenly hosts when the deed was actually done, when they saw the tiara taken off, when they saw Him unbind His girdle of stars, and cast away His sandals of gold?

Can ye conceive it, when He said to them, ‘I do not disdain the womb of the virgin. I am going down to earth to become a man’? Can ye picture them as they declared they would follow Him! Yes, they followed Him as near as the world would permit them.

And when they came to earth they began to sing, ‘Glory to God in the highest, on earth peace, good will toward men.’ Nor would they go away till they had made the shepherds wonder, and till heaven had hung out new stars in honor of the new-born King.

And now wonder, ye angels, the Infinite has become an infant. He, upon whose shoulders the universe doth hang, hangs at His mothers breast. He who created all things, and bears up the pillars of creation, hath now become so weak that He must be carried by a woman!

And oh, wonder, ye that knew Him in His riches, whilst ye admire His poverty! Where sleeps the new-born King? Had He the best room in Caesar’s palace? Hath a cradle of gold been prepared for Him, and pillows of down, on which to rest His head?

No. Where the ox fed, in the dilapidated stable, in the manger, there the Saviour lies, swathed in the swaddling bands of the children of poverty!”

–Charles Spurgeon, “The Condescension of Christ”

blue letter bible also has this compilation of advent resources worth reading!