one day at a time… 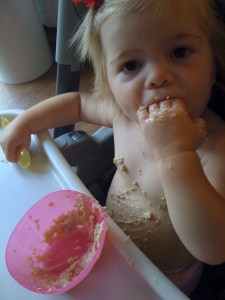 i learned something interesting last week…i learned that all children are not this messy when they eat. i thought this was the way toddlers ate until i was talking to someone last week and they asked me, “is she always that messy when she eats?” shockingly, not every toddler gains such enjoyment from rubbing their food into their tummy or hiding it in their belly button or poking it in their nose. i had no idea. 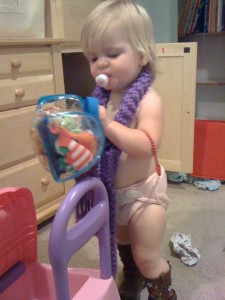 this would be a child that is really into getting herself dressed…in of course, the essentials…boots, a scarf and a necklace. 🙂 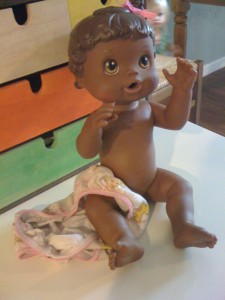 warning, if you leave the room…your toddler may take her panties off and put them on her baby instead. 🙂 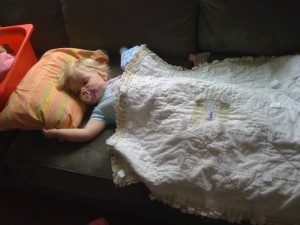 yesterday, we were at the church office, working and addy started acting a little fussy. we took her temperature (three times!) and it was 102.7. yikes. i took her home, gave her tylenol and this was her after the tylenol kicked in. 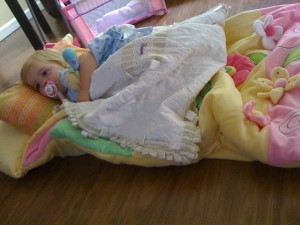 this is how she spent the rest of the afternoon/evening. i’ve never had her lay still for more than five minutes, so that’s how i knew she was actually sick. even with tylenol and motrin, her temp hovered around 100 degrees yesterday. 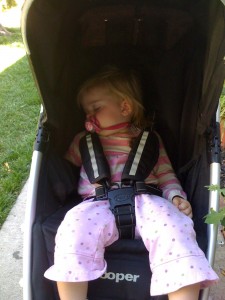 today she was a little better although she still has a fever. we took a walk and she ended up sleeping most of the way. i parked the stroller in the shade and kept an eye on here while i did some work outside the house.

sorry for the fuzzy pictures…i haven’t actually pulled my camera out this past week, so these are just cell phone pictures. we are definitely taking one day at a time. i am just starting to read emails, facebook messages, etc. and they are very encouraging.