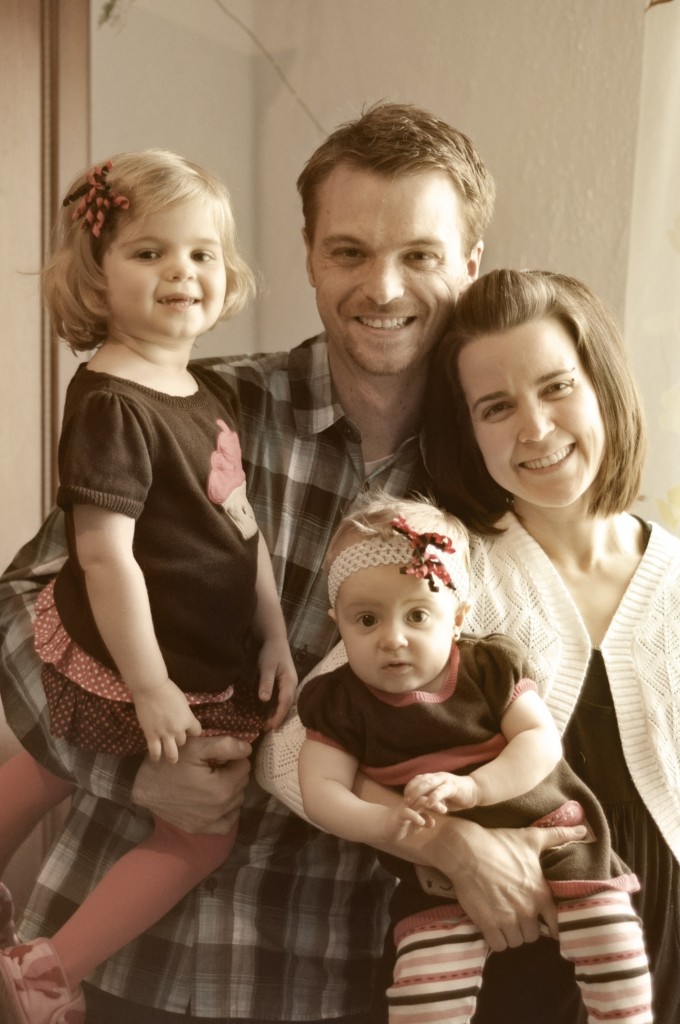 we had a pretty good easter, all things considered. i had planned on getting more things accomplished but in the end, we did what we did! i started matching dresses for the girls six days before easter. bad idea. i got the flu thursday night and it took every ounce of my energy on friday and saturday. needless to say i still need to finish their dresses (which are really cute by the way!). addy and i did some strings/glue eggs (similar to something i saw on pinterest) except that the balloons here are actually somewhat possessed and our garland is going to be really cute year round stuff instead. {pictures in a later post, promise!} addy and i also made some cool crystal eggs from a website my mom sent me although i just realized i haven’t taken any pictures of them yet. oh well, maybe those will be in a later post also. we also dyed eggs. psycho eggs. with crazy dye. seriously it was an experiment. 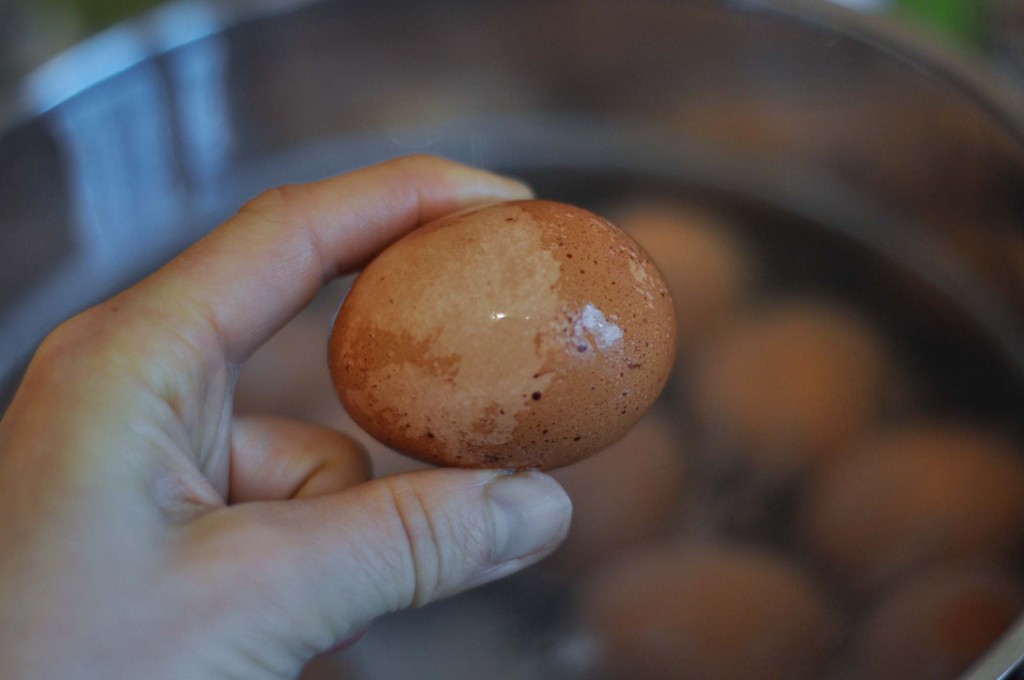 we had these eggs. but i read around on the internet and some people actually prefer to dye brown eggs. the website i found said to give them a diluted vinegar bath before coloring them. i followed the instructions and my eggs became splotchy. everything i read said pat the eggs dry, don’t rub them…but i am not sure they were talking about my eggs. 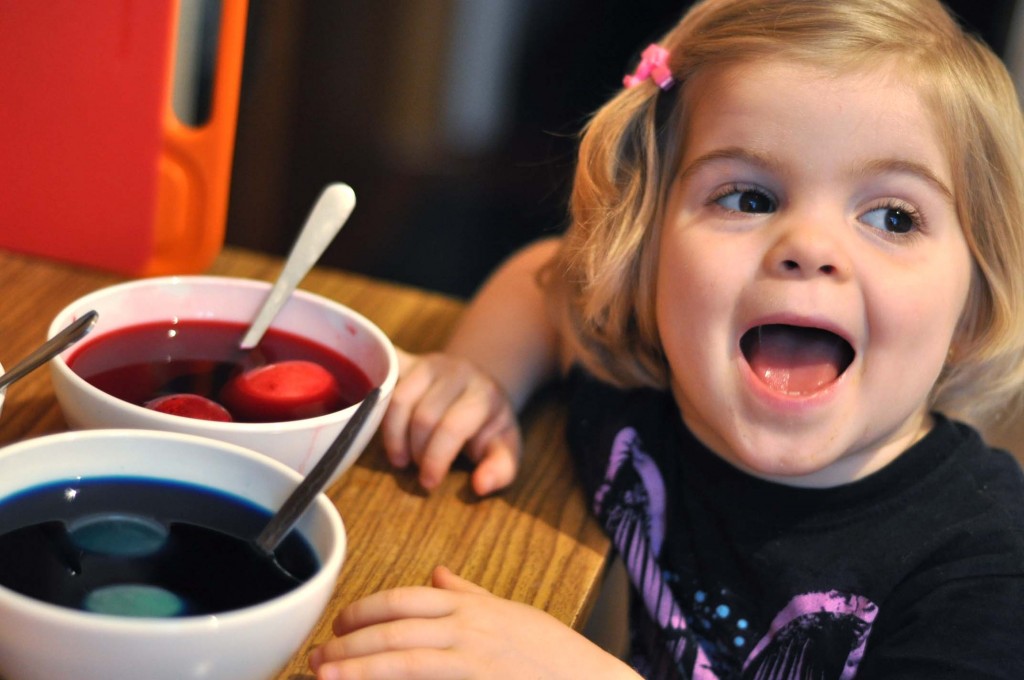 this was the dye. it was liquid. it squirted all over my hands and my hands became deep, maroon red. i was a little worried and it took washing the dishes all day and the next before the dye came off (lucky christian!) 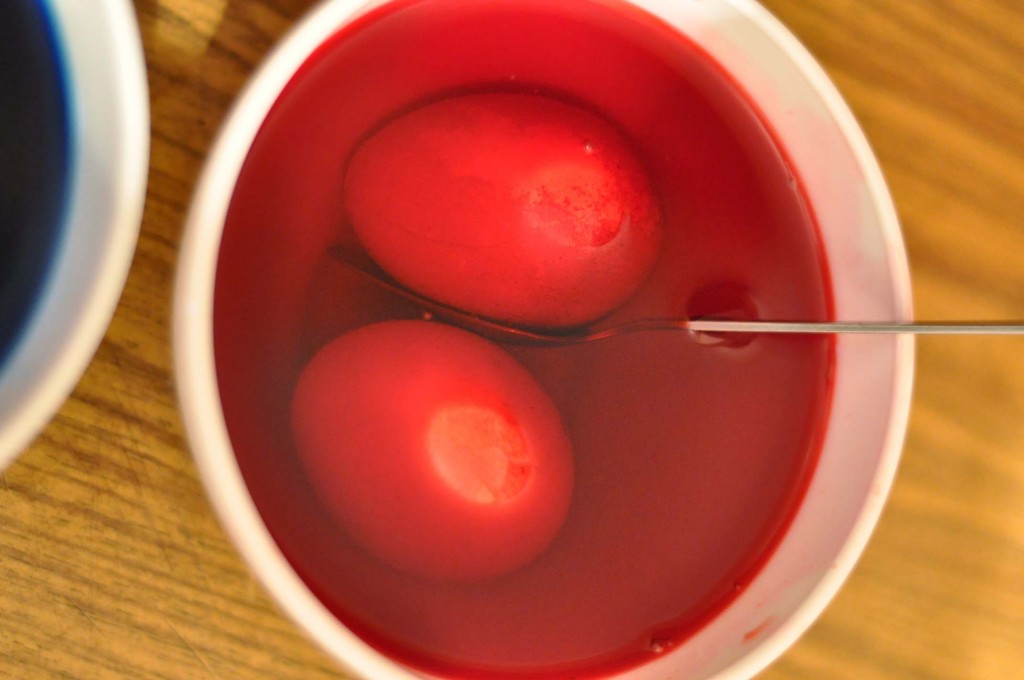 addy thought coloring eggs was a blast. she kept talking about making the eggs pretty and keeping them forever. the eggs came out…interesting. they were obviously extremely splotchy. some turned deep dark colors and some not so much. the good part is that i also found those shrinky-dink thingies and we added those. those make all eggs look better. 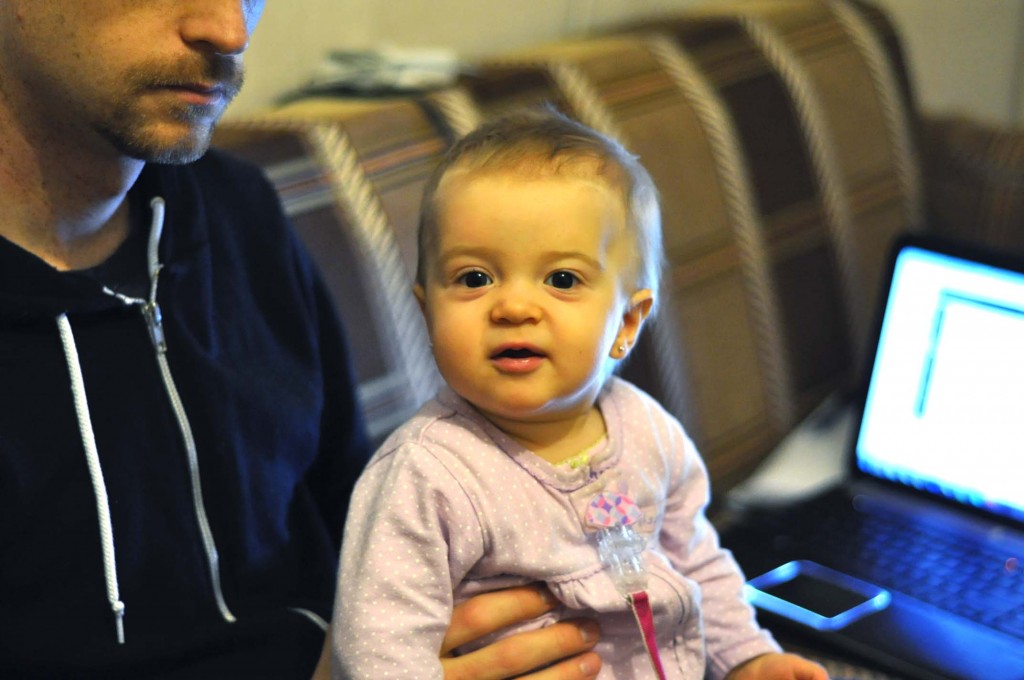 sunday morning…mercy does not seem to have inherited puffy morning eyes quite like addy did. this is also a quick glimpse of dada without coffee. okay that’s a little mean…he was also getting sick. he’s not normally that sad/serious/scary looking with or without coffee! 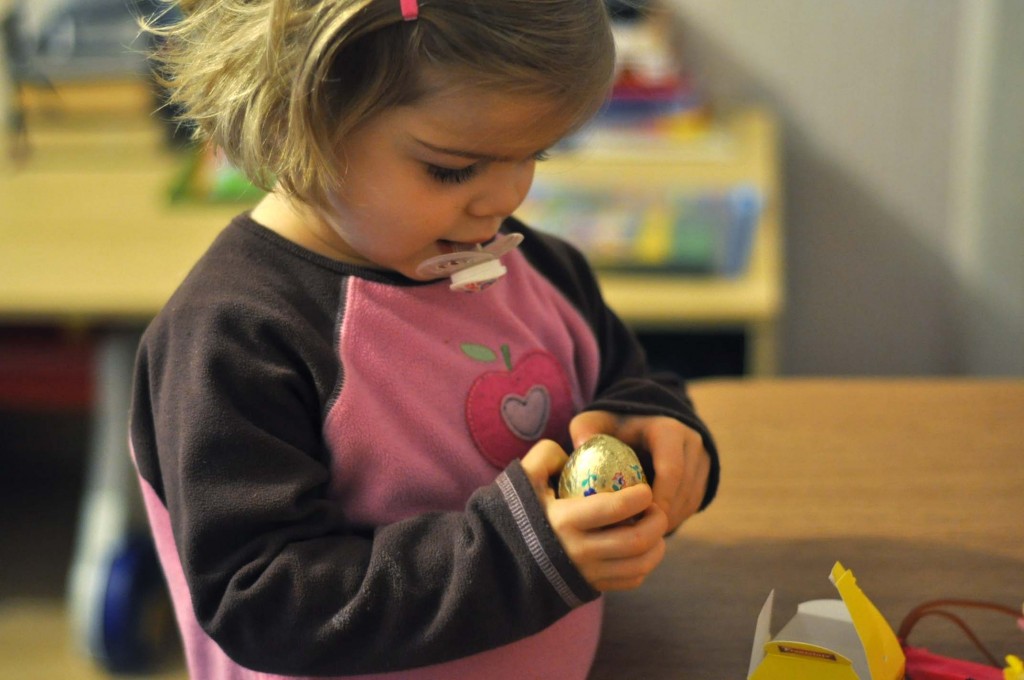 i don’t know who thought giving a three year old candy upon waking was a brilliant or fun idea. i really plan on rethinking our easter traditions for next year. i don’t go overboard…i found these hollow chocolate eggs and addy also got a mini package of skittles. but really, what was i thinking. here’s come chocolate, addy…but no, you can’t eat it yet. 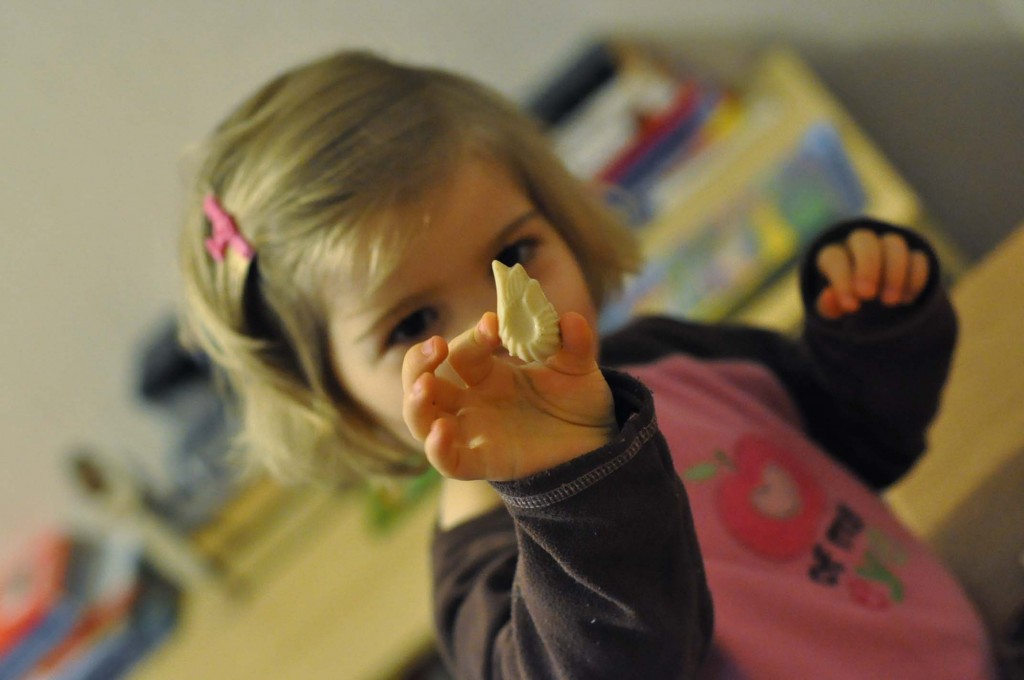 {side note, they box said “egg of gold” and it was obviously hollow with something in it. i was thinking maybe there would be little “gold” coins in it…but no, there was this piece of white chocolate in the shape of…an olympic symbol? what is that thing? 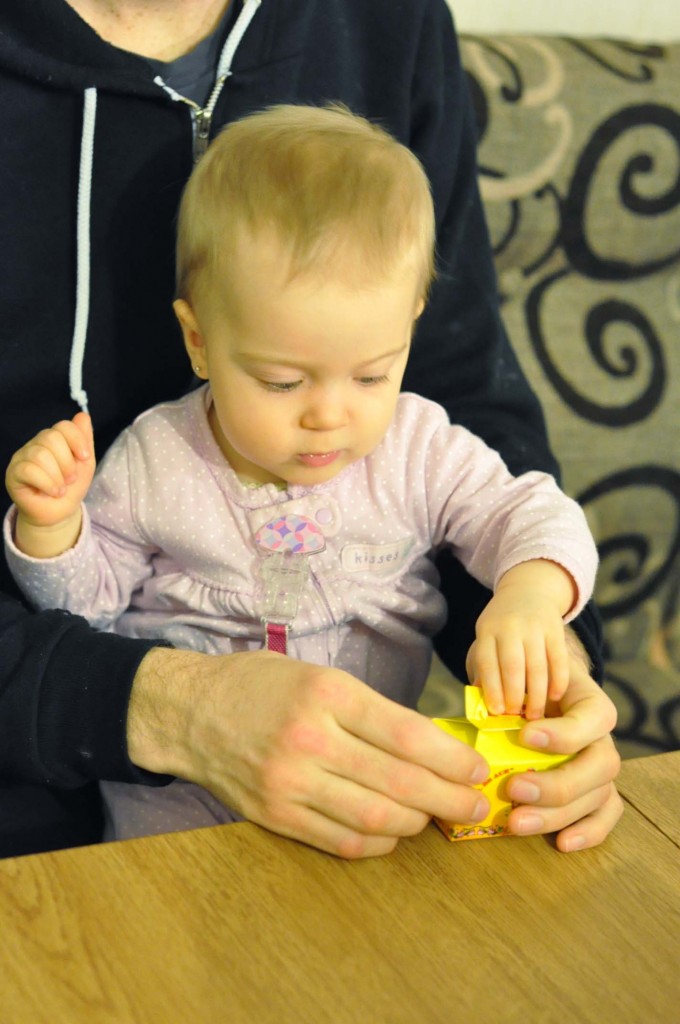 this is mercy opening her box. she really likes boxes. 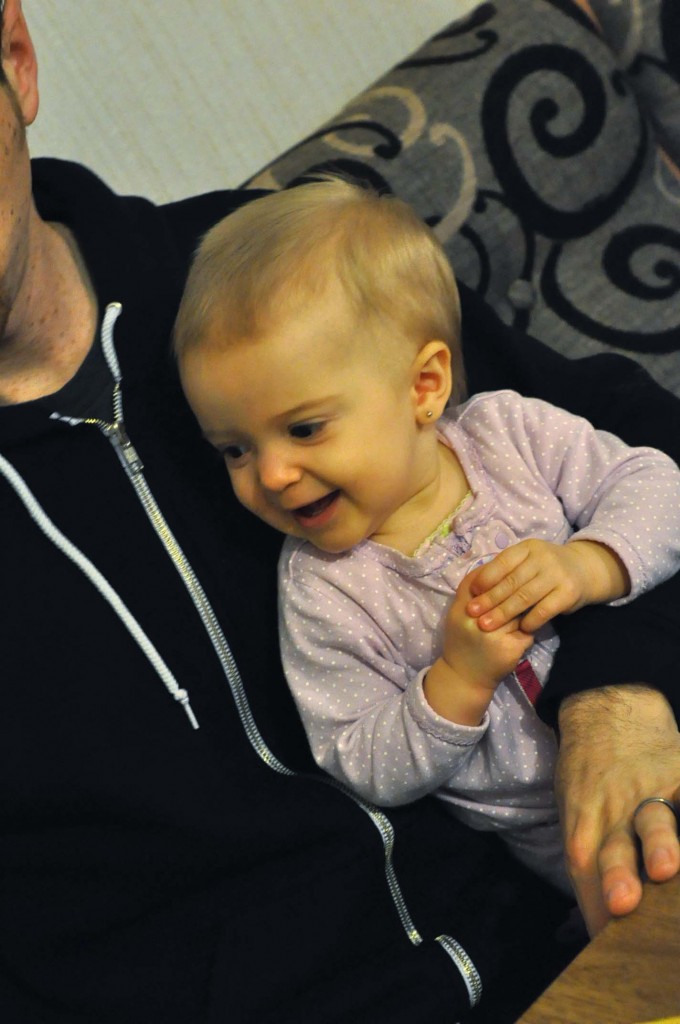 this is mercy after receiving a centimeter-sized taste of the white chocolate inside before giving it to dada. she also really likes sugar, obviously. shocking. 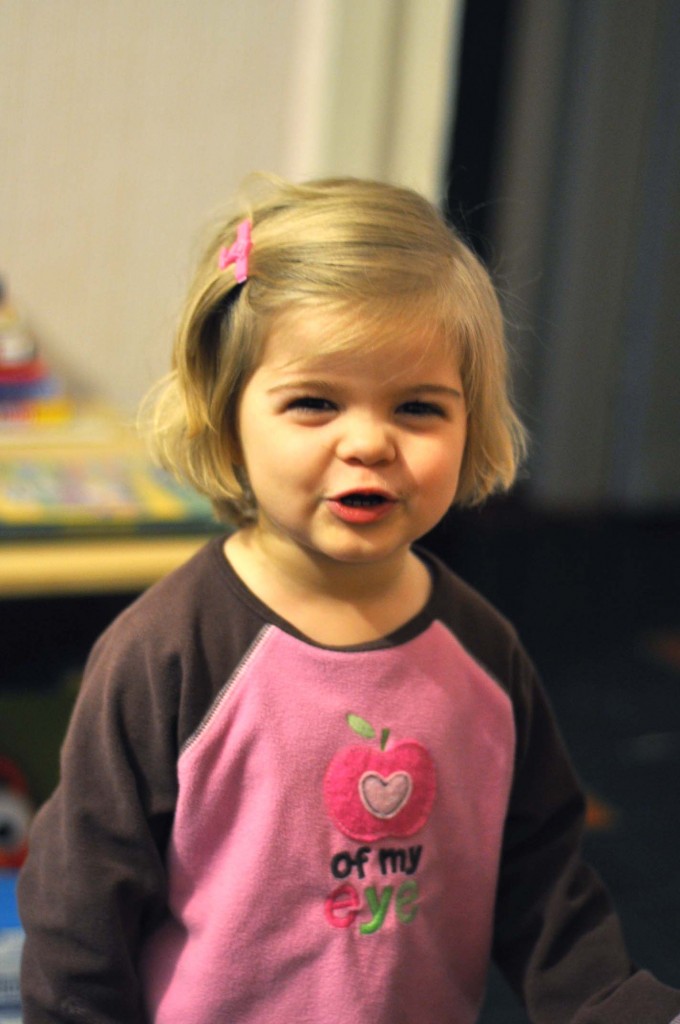 this is a three year old that has been told they don’t get to eat a bag of skittles (miniature or not) and a chocolate egg (hollow or not) for breakfast. it went over quite well, if you can’t tell. then christian took the girls into their bedroom while i tried to figure out something better. 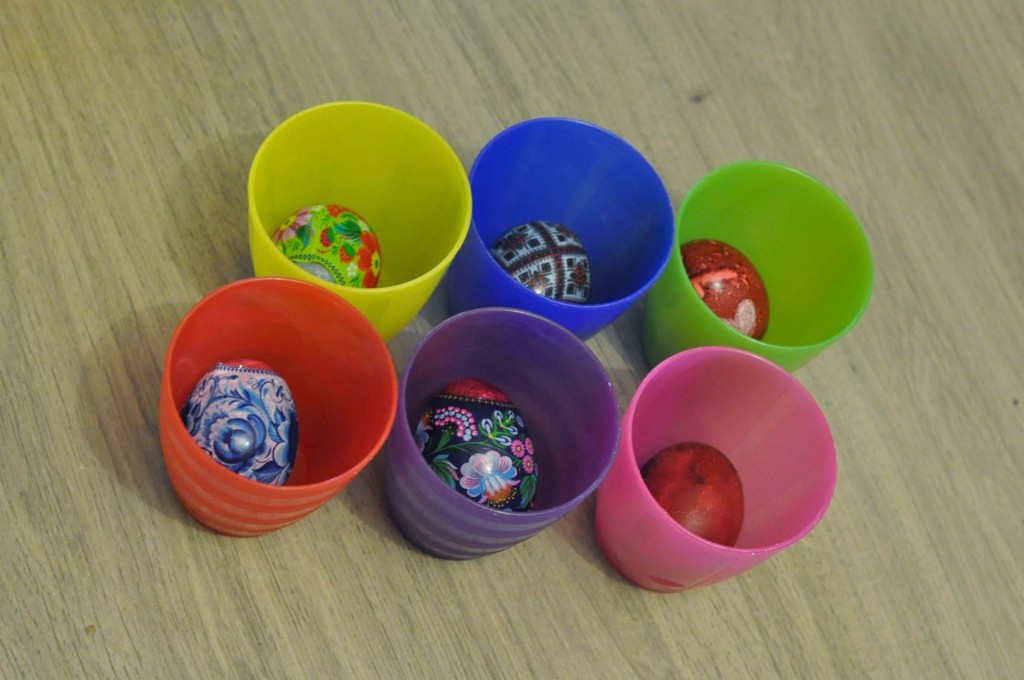 and it came to me. i can’t credit another source but i probably saw this or something similar somewhere. maybe i saw it on a blog or pinterest, who knows. it was brilliance either way. the eggs are in cups due to the psycho-ness of the egg dye. this egg dye might stain skin for days but it practically wiped off our eggs. just plain weird if you ask me! 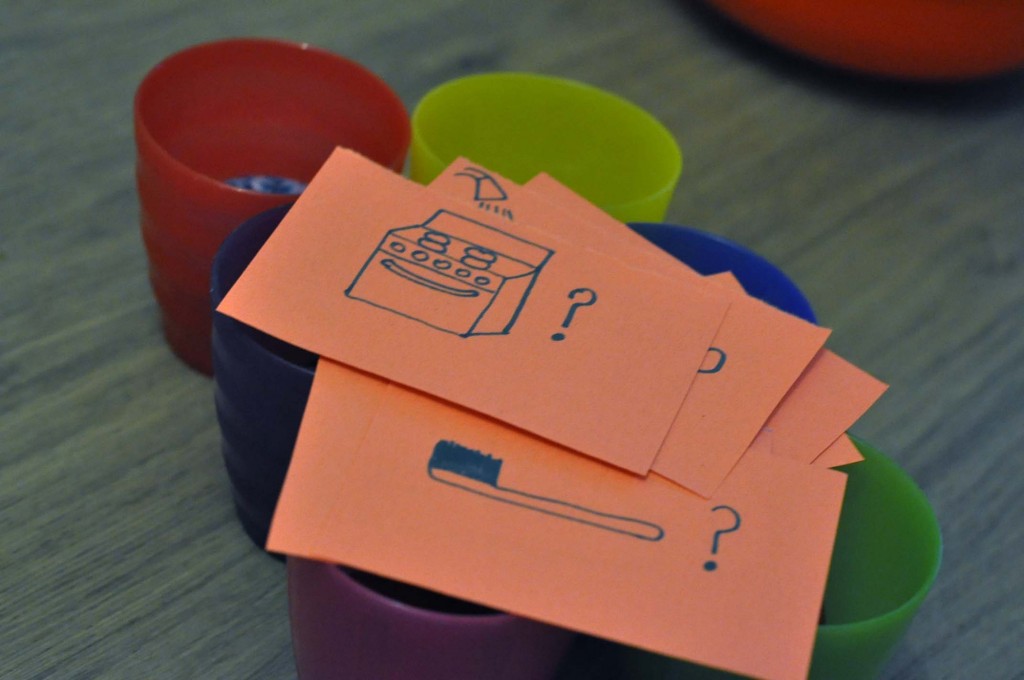 i cut a peice of paper into eight squares and drew (is that the right word? i’m losing my english!) the fastest drawings known to man. so don’t judge the quality. i actually know how to draw when i don’t have two children staging a revolt in the other room. 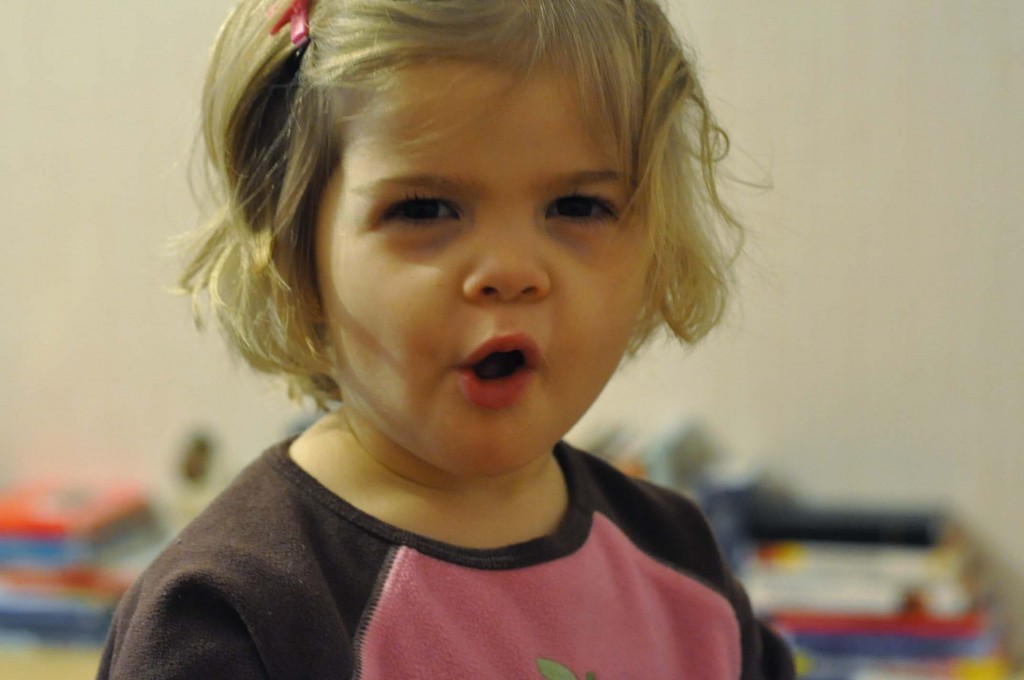 i hid the eggs in said locations. i went in and told addy, “you won’t believe it. our breakfast is lost! someone stole it and hid it throughout our house. here are the clues and you have to find our food so we can eat.” she just wasn’t digging it at first. she was still thinking about miniature bags of skittles and hollow chocolate eggs. 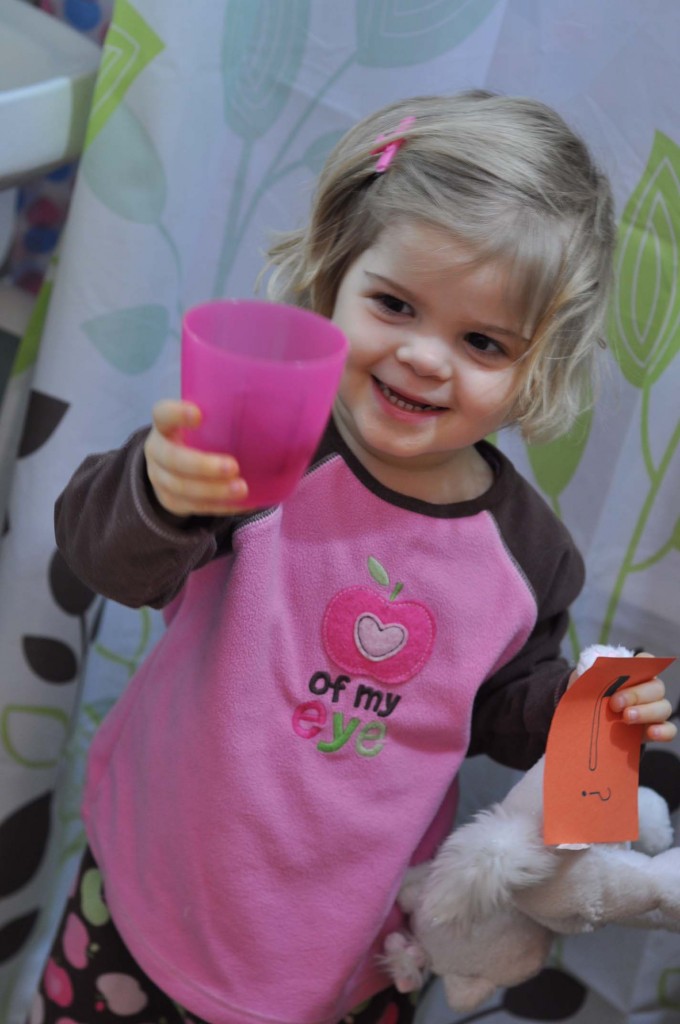 and then she found the first egg and she was hooked. she came bolting back, “mama! i found the treasure! give me another clue!” 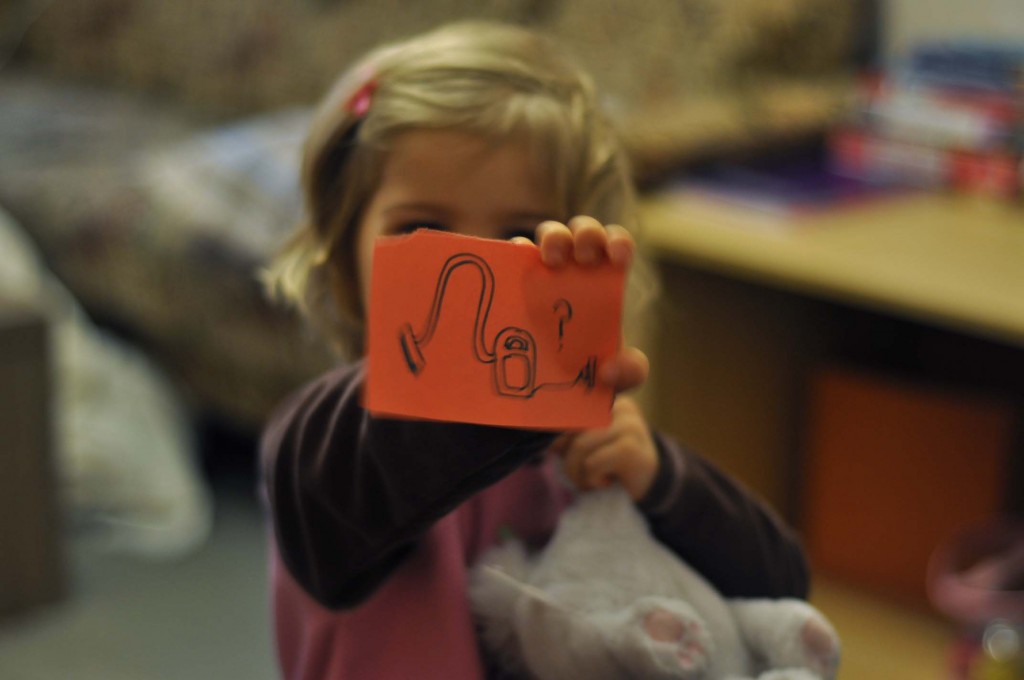 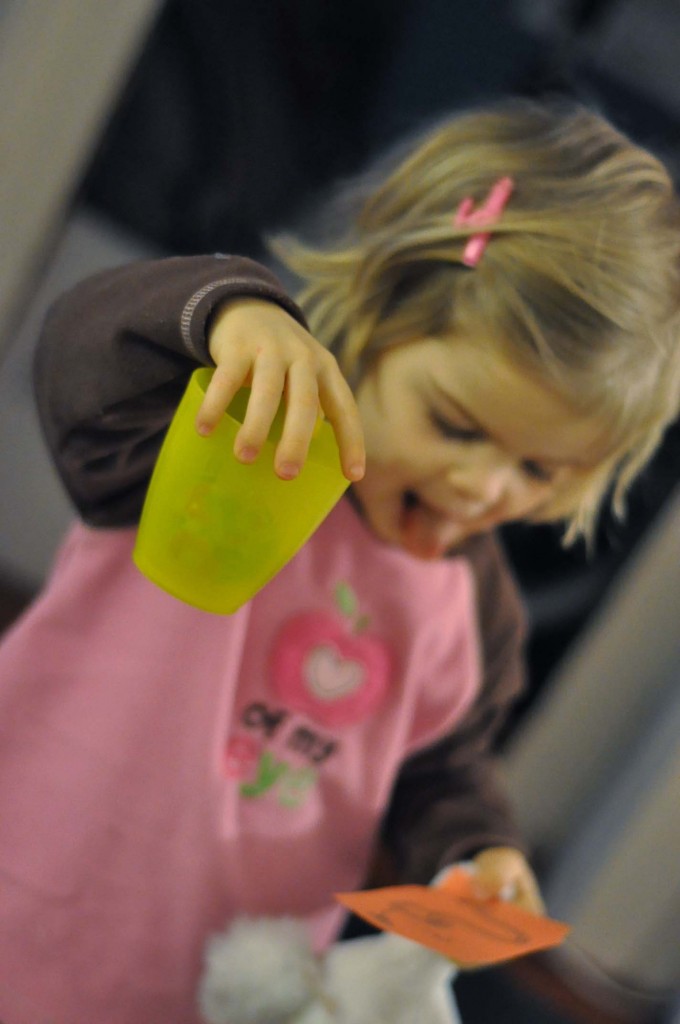 she go so into it, she would “read” the clue…”go to the vacuum and somewhere is the treasure egg.” 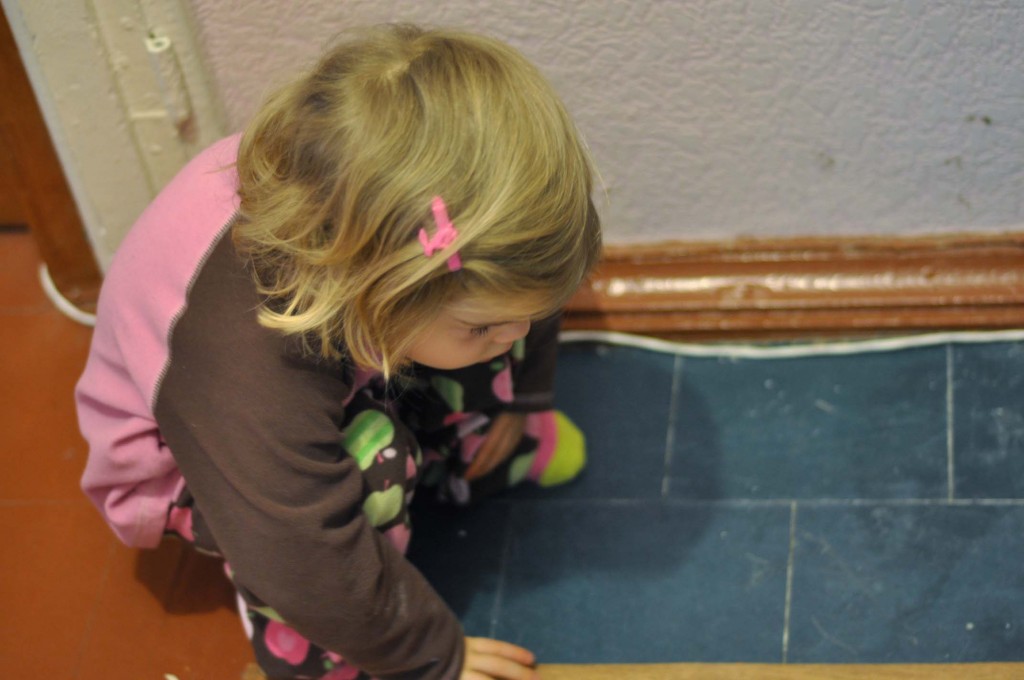 she searched high and low and would laugh each time she would discover the hiding spot. she would also “oooo” and “ahhh” over each egg even though she had seen them all many times before. 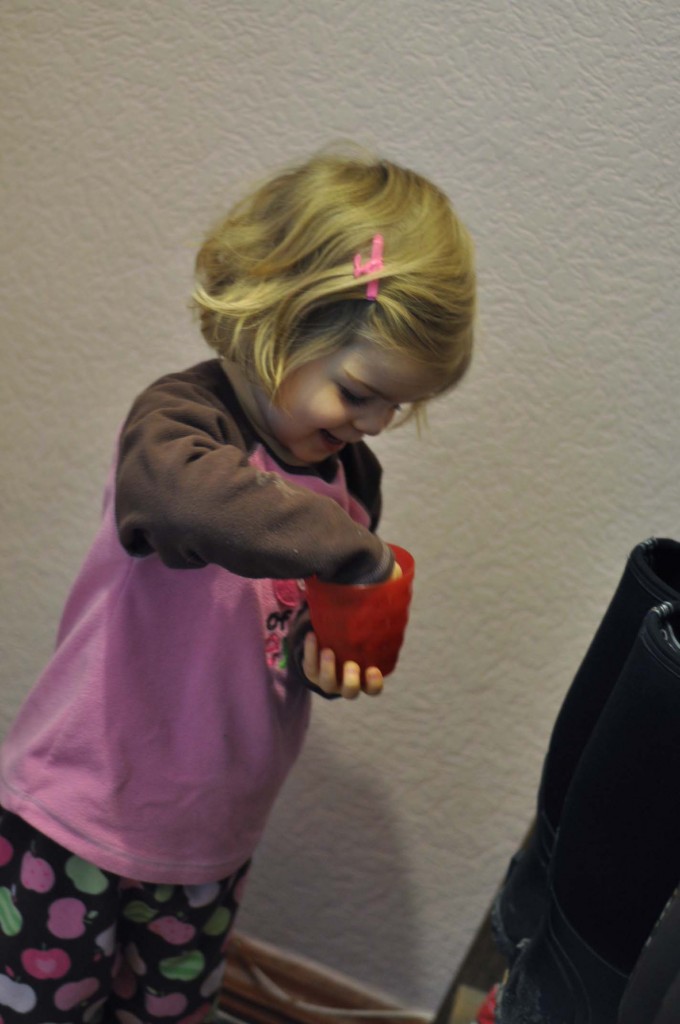 i’m telling you, it was my moment of God-given brilliance and redemption for giving my kids candy before breakfast and then not letting them eat it. 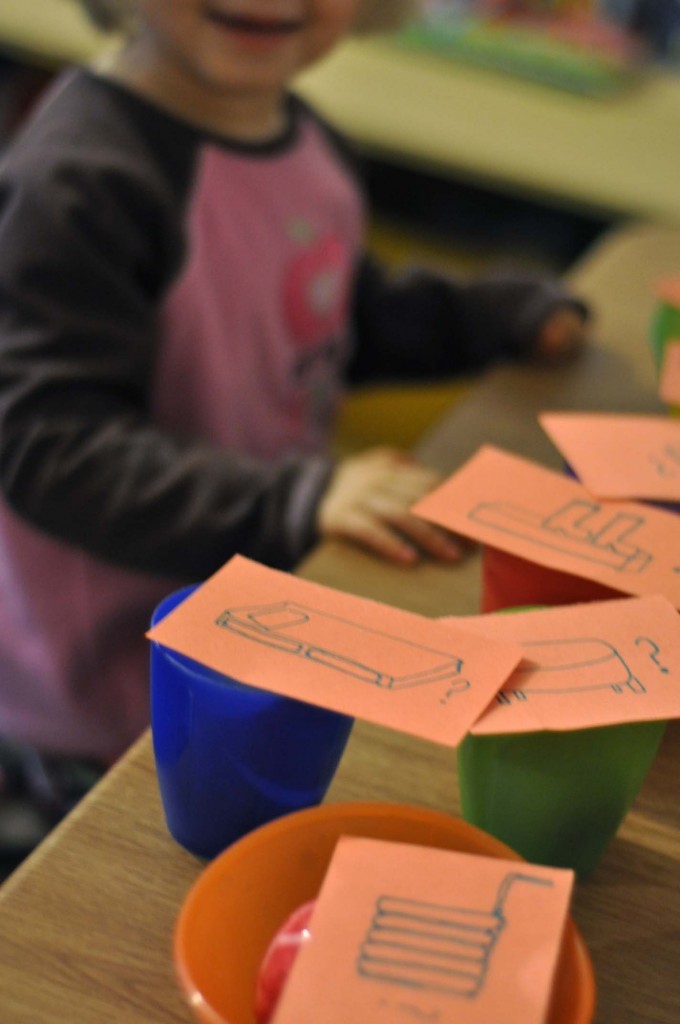 the closest one is our heater. there’s a video at the very end of her looking for the final egg (under the heater). 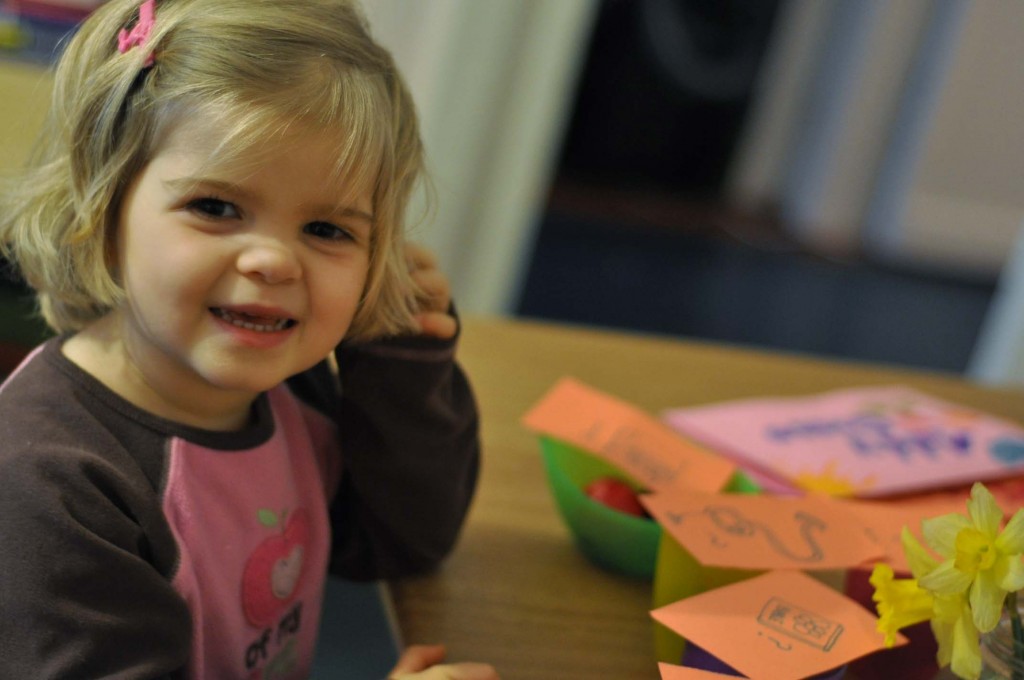 a very proud and accomplished treasure-hunter! after a fun breakfast, showers, pretty outfits and such, we headed out of town where we spent the rest of the day with three other families from church. this is the view from the house we were at. 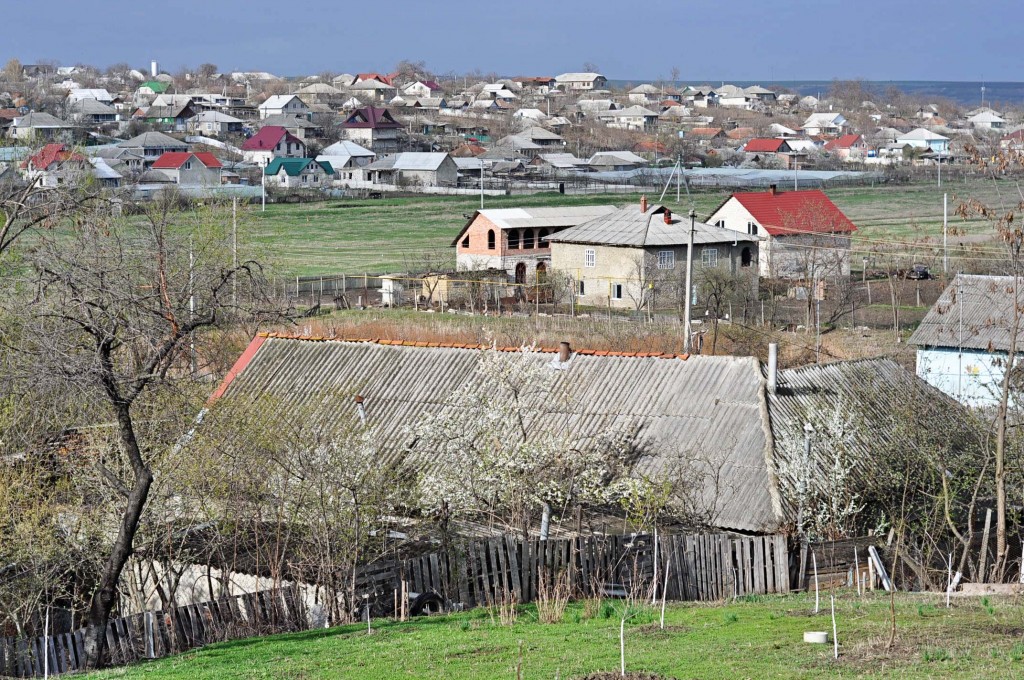 it’s amazing what just a few weeks of rain can do…do you see the little white buds on those trees. they are so close to being in full bloom. 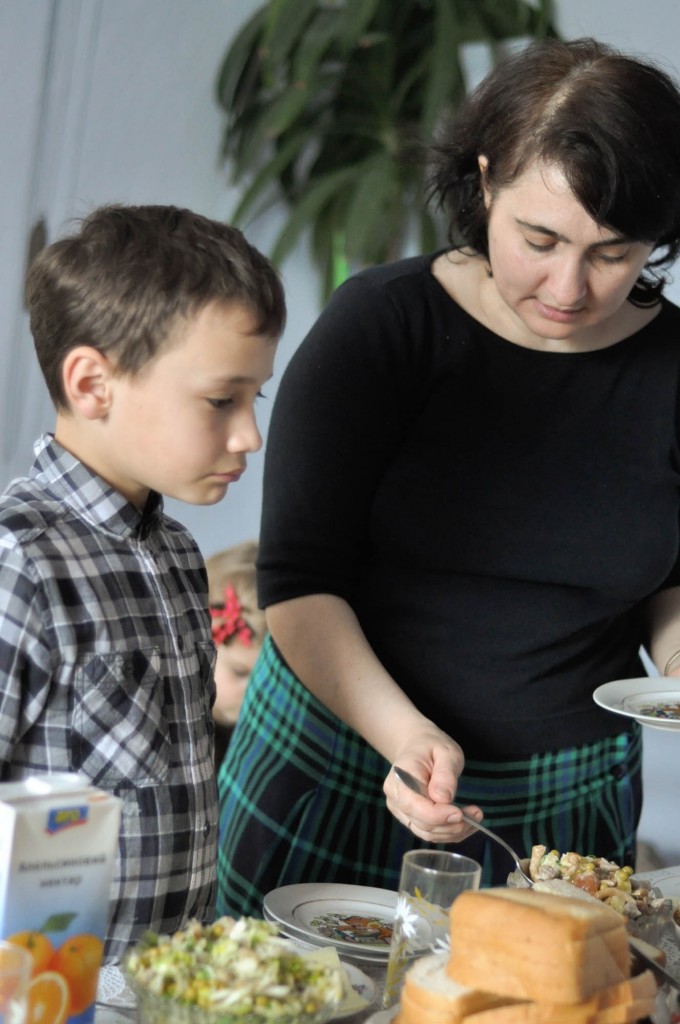 four families can actually put together quite a spread! 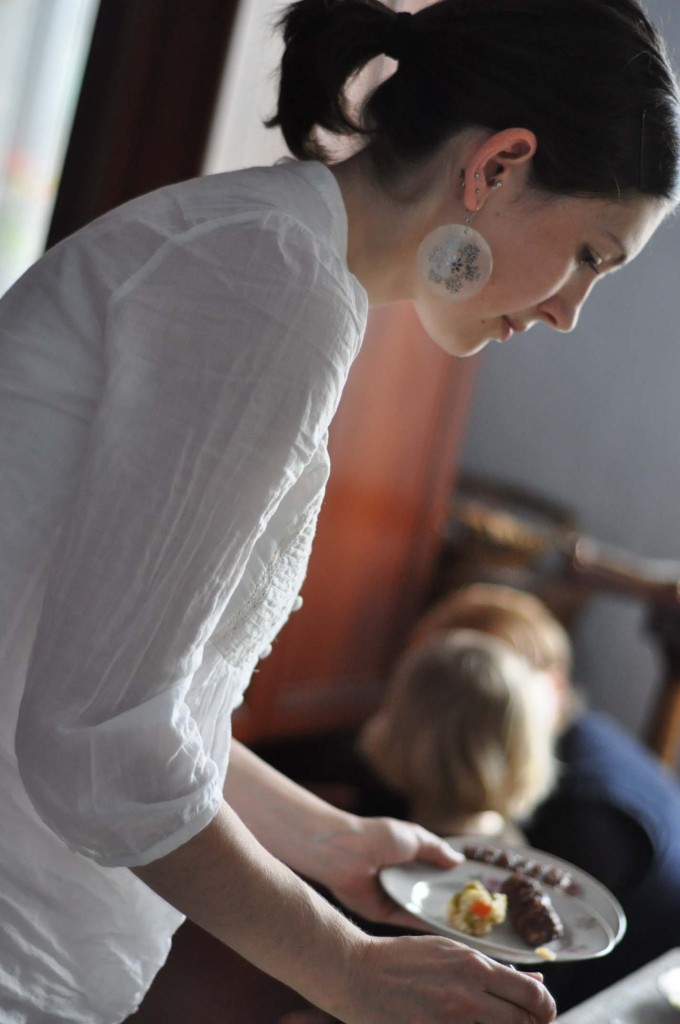 that’s our ever talented teresa…do you see the double plates in one hand serving job going on there? yup, talent! 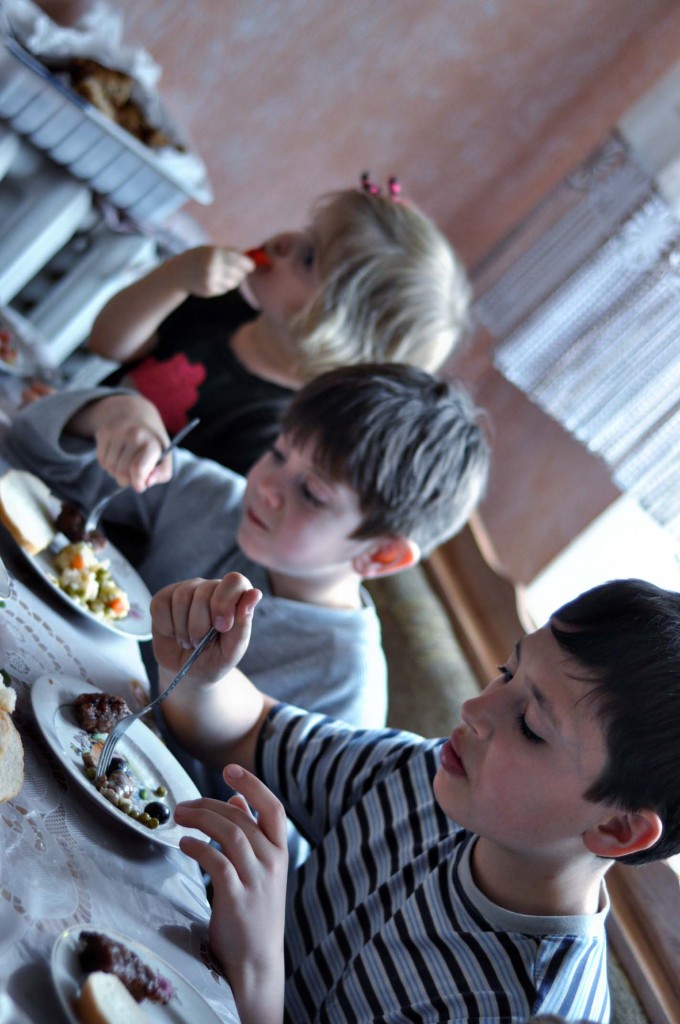 the kids’ table: cristi and ludmila’s oldest – cristinel, steven and teresa’s oldest – aiden and our oldest too. 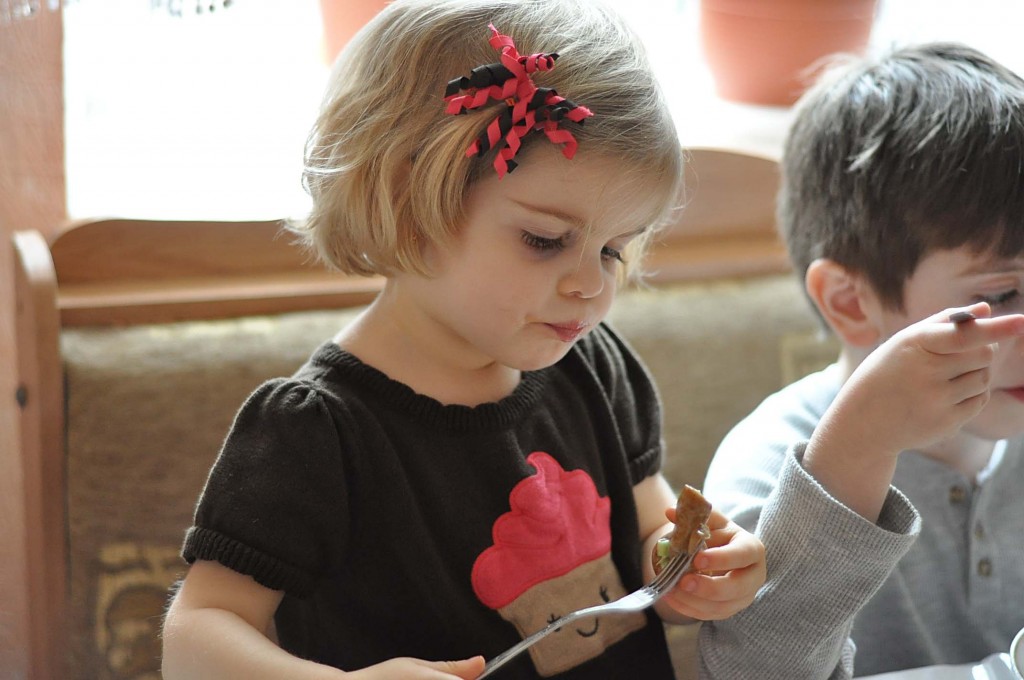 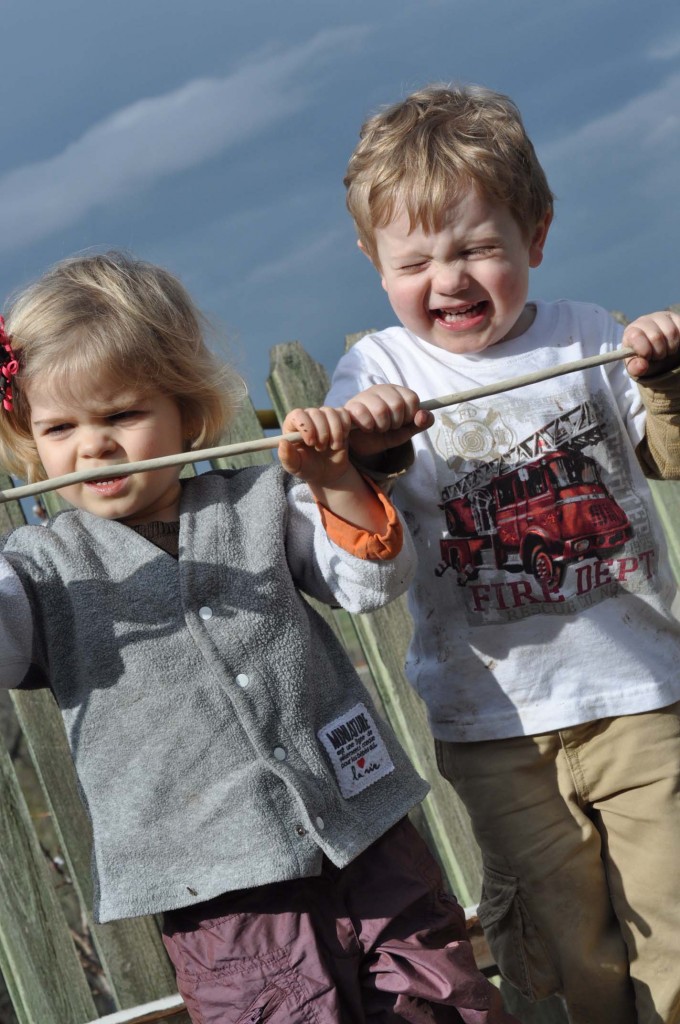 then these two played outside. i swear with their love-hate relationship, they just might end up married. they were “rowing” a boat obviously. they are a year apart in age but elias is almost as tall and has a few pounds on her! 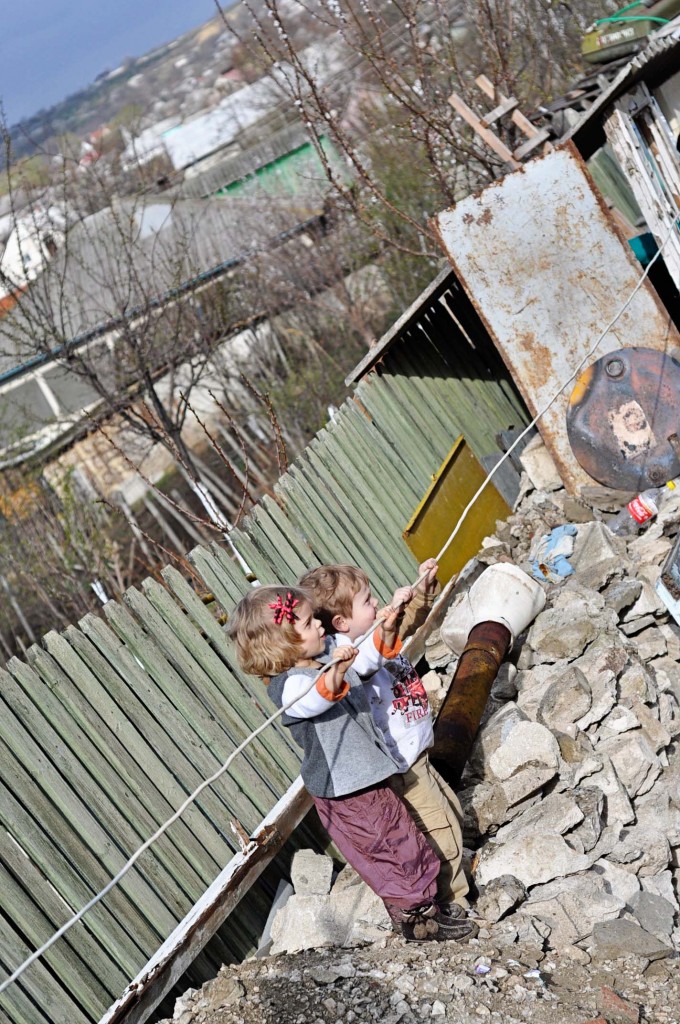 a (kind of) long video of addy finding her last egg. should you choose to watch it…please ignore all the towels on the kitchen floor (our fridge leaks) and the messy condition of our home…i was still getting over the flu!