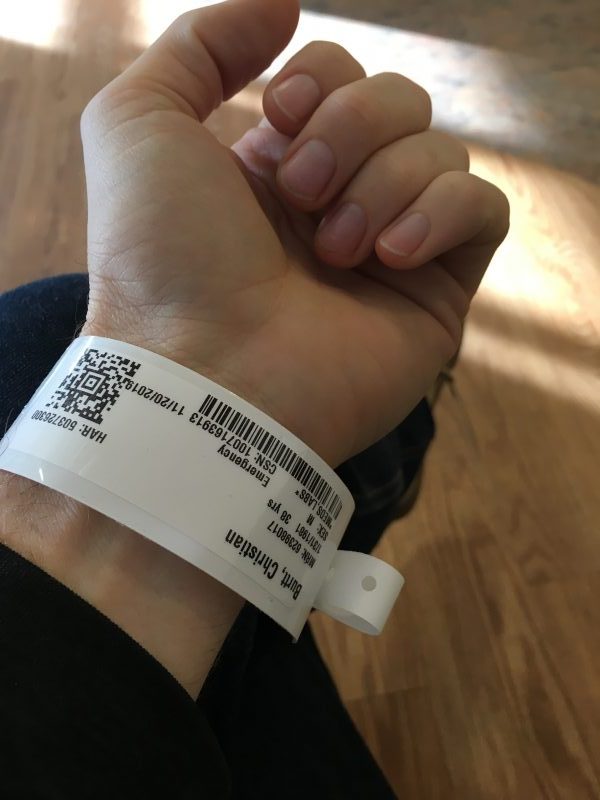 Well, this wasn’t the week I was planning on having. I was supposed to be coordinating with Ethiopia, fundraising here in the States, working on projects for clients on my side-hustle, and just generally being a dad. I guess when you have 5 kids in the house you have a higher chance of getting sick! 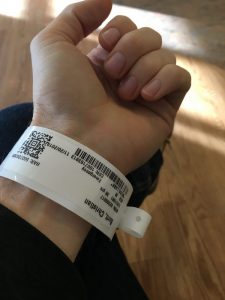 I got 2 of these bands with 3 different stickers!

Monday I had a cold-feeling light sore throat. Nothing too bad until it was hard to swallow in the afternoon / evening. I start asking Marie if she thinks its strep – same question for every cold for our entire marriage. It never is. I send her gifs of red with white polka dots and say its my throat. Tuesday is worse – can’t swallow without grunting. In the mirror, my throat is swollen and I send her gifs of a train tunnel collapsing. Wednesday was the worst. Went to the office and had my call, but had to come home because of pain. My wife looks in my mouth and says, go to bed, I’ll take care of it. She wakes me an hour later and sends me to the Dr’s appointment she made me. 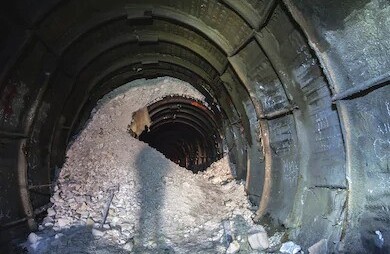 Actual image from the inside of my throat on Tuesday evening.

Guess what – I had strep. So, while I felt terrible, I also let my pride pick up a bit! But I also had a peritonsillar abscess, so my Dr sends me to the ER with a post-it note describing the problem. The ER checks me out, gives me fluids, and drains the puss. They send me home with some prescriptions for painkillers and antibiotics and to follow up with an Ear-Nose-Throat Dr. the next day. Problem solved, right?

So that night was atrocious – I lived through Dante’s 4th circle of the Inferno. In the morning I was scared and in excruciating pain. I looked and the abscess had regrown to 2-3 times its original size and was almost closing my airway. We called both ENTs on the referral list and got an appointment for Monday morning. At noon, I went back to the ER, they were great and got me transferred in an ambulance down to Roseville (no lights or siren so basically just an uber where I got to lay down), and that’s when the fun began. Another sleepless night as we had to prep my body for the surgery to do a complete drainage of the abscess.

Friday morning at 630, they roll me into the prep room and I meet my ENT surgeon who happy and great and ready to get to work. He does his thing, along with the anesthesiologist, and just past 8 I’m back in my room recovering.

I explained it like this to one of my friends: Basically the bacteria from Strep that attacks your tonsils can sometimes jump into the interstitial between your tonsil and cheek and start ejecting puss to create a new home for their bacteria buddies. The downside is that eventually that abscess will block your airway and both the host and bacteria all die, so who’s laughing now? Or, the other option is to get a surgeon to go in there like Texas Chainsaw Massacre and kill them all. Which is what my Dr. did. 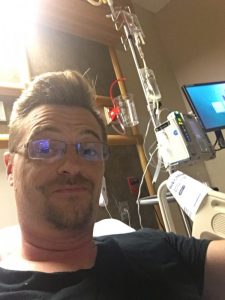 Still all puffy after they cut the nasties out of there. They even wrote on my face so they’d remember which side to cut on. Too bad it hasn’t washed off yet…

One more – actually restful – night in the hospital for monitoring, extra antibiotics and pain killer and I am home now and resting, abut to sleep in my own bed for the first time without significant pain.

Wednesday morning, when I awoke, I was struck with such fear from the pain that I was weeping. I hate pain and I have a low pain tolerance – I never said I was a tough guy. But the fear surprised me. It didn’t take me long to say “no, I will not be afraid of this.” Either I’m going to live or I’m going to die, but I will not fear. I am sick of fear. Jesus is Lord. He is a good king and I will not fear.

And I received such a feeling of peace.

After that, I realized how much I had to be thankful for. I was not alone in this – I was the only one in pain, but my support system was astounding. My wife – who’s getting too good at single parenting 5 kids – was a rock. One of my very good friends, Dan Getz, gave up his night to stay with me at the hospital. He took copious notes and made sure that drugged-up Christian didn’t miss anything important and that Marie was up-to-date around-the-clock.

On top of that, I wanted to give a shout out to all the medical staff. My PCP, Chapa-De were really quick an efficient and got me to get to the ER ASAP. Sutter Faith Auburn’s ER room was great – Kirk, Dave, Julie, and the Dr. who I *thought* was an ENT but just an awesome ER doctor who drained it the first time and then got me on an ambulance down to Roseville. Shane and Hazel, my EMTs – Hazel was adopted in Singapore, so we had some good conversations about adoption! Ryan, Rankesh, Kristine, Alison, Trent, Aimee, Kisha, and Dr. Dixit and Dr. Henderson and all the others I’ve forgotten! The team in both hospitals were AMAZING and I can’t recommend them enough! 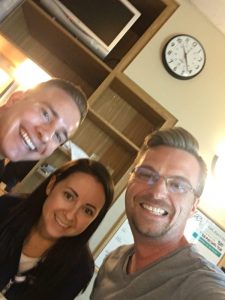 Trent, Diana, and Me just as I was leaving. “Is there anything else I can help with” “Actually, can we take a selfie?!”

Finally, I was really happy to be back to hear my kids giggle as Addy had a little neighborhood birthday party. I’ve been too tired to participate much, but being home is a blessing. This is not the week I wanted nor planned, but it’s the one I got, and I’m thankful for it, because I looked fear in the face this week and I feel like I won. Not because I’m some great person but because I have a great Christ. I won before I was healed. Because even in death, Jesus is Lord. 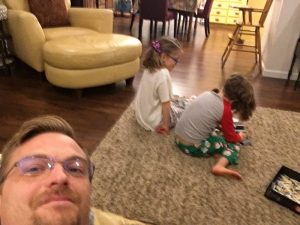 At home this afternoon, grateful, watching the girls do some legos.