cream of potato and spinach soup

only it doesn’t really have spinach in it. cream of radish green and potato soup doesn’t actually sound very appetizing.

i miss a few things but one thing i am still not used to…is the lack of easily available green veggies (during the winter). i am really enjoying springtime and the new veggies it is bringing! remember this post where i first found wild leeks and beautiful radishes with greens? i knew then that i had to figure out how to use the greens. i miss leafy green veggies and can’t bear the thought of throwing anything leafy and green away! my first experiment was this meal – – and it wasn’t bad! i kind of made it up as i went along. i had one small-ish bunch of radish greens that i steamed with a chunk of neon orange pumpkin and a few carrots. i blended it with kefir (a drinkable yogurt) to make a cream soup base. separately i sauteed diced carrot, onion, potato and garlic in chicken stock with curry, salt and pepper. i stirred the veggies into the cream soup and it was a delicious curry – – pretty similar to mary’s secret garden in ventura, yum! the next day we ate it over rice and i think it was even better.

today i went shopping and every week i find more signs of fresh green produce! i bought wild leeks, baby spinach, baby sorrel, miniature bunches of leaf lettuce, green onions, fresh dill, fresh cilantro and more radishes with greens. when i got home i realized i still had a bunch of radish greens from last week that i hadn’t used yet. this time i didn’t have any neon orange pumpkin so i decided to try some sort of cream of potato soup. i washed and trimmed all my radish greens and i was a little intimidated at first. radish greens look like a LOT in the beginning and they can be a little gnarly and prickly. i peeled and diced two somewhat gigantic potatoes and steamed the potatoes and greens together with salt and pepper. while that was cooling, i sauteed two more potatoes, an onion, two carrots and half a bulb of garlic (all diced) in chicken stock. then i started blending the potato/greens mixture with water. the greens cooked down significantly but they still made everything an amazing and beautiful shade of green. why didn’t i think of this for st. patrick’s day?! i stirred all the cream soup into the cooked veggies, seasoned it with cumin, pepper and vegeta (a romanian/moldovian seasoned salt). i tasted it…and i am pleasantly surprised. it tastes like a cream of potato soup. just a lime-y green colored version. christian isn’t home yet so technically he hasn’t given his opinion but the kids like it. i think it tastes good with a {dollop?} of plain yogurt on top which for your normal person would be sour cream but i prefer the health benefits of yogurt for my girls. 🙂 i had mine with a little hot sauce and i think christian would have enjoyed some tastefully simple bacon bacon on his if we had it.

hopefully tomorrow i will post pictures of our easter weekend but i thought you might enjoy a glimpse of green soup until then. 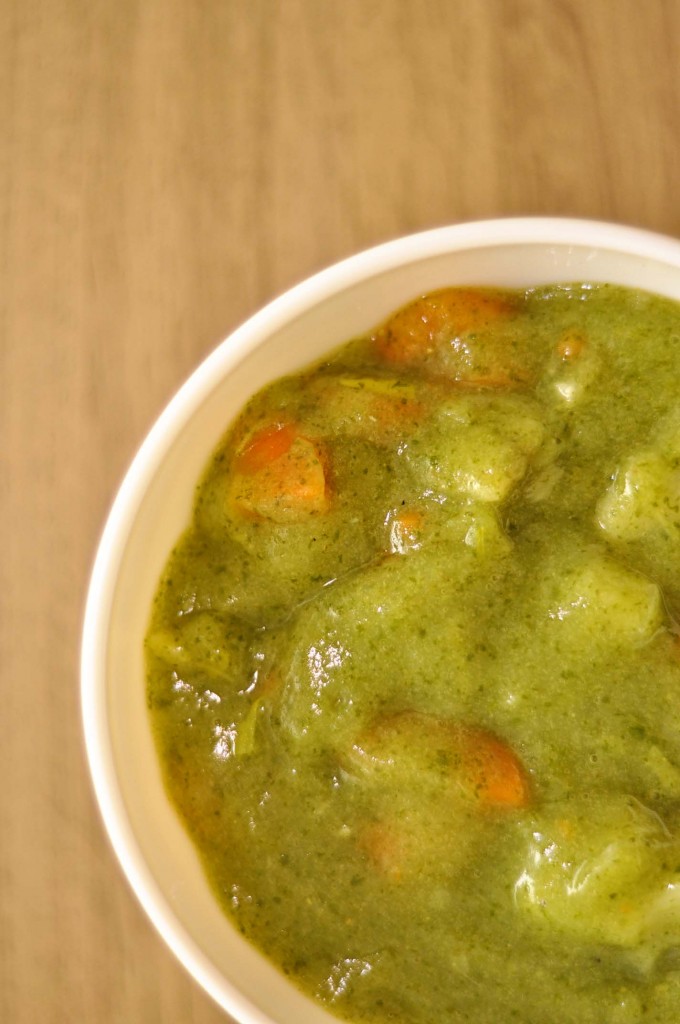